Say it ain’t so Batman? It is Robin, a customised BMW C Evolution called the Krautmotors E-LisaBad Scooter. For the Pure & Crafted festival in Berlin BMW wanted something a bit “out there”, so they went to Krautmotors German builder Rolf Reick and he came up with this beauty, that wouldn’t look out of place on the set of a Batman flick. This electric bike just looks tough, but you’d be surprised to know it was inspired by a his grandmothers 1920s cubic service tea set. What makes it even more impressive he didn’t use a CAD (Computer-Aided Design) program for the front bodywork he drew it himself. 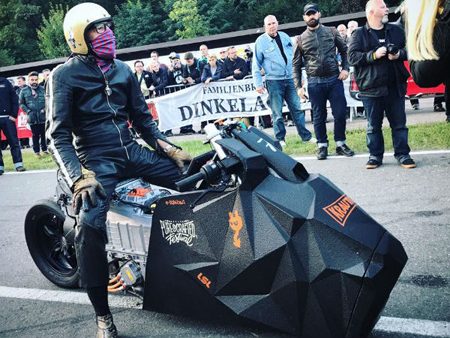 Up for a drag? Photo: Unknown.