Wonder if James Bond has one of these in his armoury of spy gadgets the TWI01 pen. Made by HHA (Hardcore Hardware Australia) the TWI01 (Tactical Writing Instrument) is kick ass or should we say kick glass. Because not only does it look super cool it can even break glass in an emergency, that’s right, so when Daniel Craig is signing on to become the highest Bond star of all time he knows he’s safe.   It’s constructed from 6000 series, non-reflective; black anodized aluminium and the dome from high-grade stainless steel. It also includes a series of O-rings making it completely waterproof when the cap is screwed down over the writing tip.  The ‘pen’ (not this one) has played pivotal roles in three of 007’s films, in Never Say Never Again (1983) he used a pen gun (A fountain pen) emblazoned with the Union Jack to fire an explosive charge, Moonraker (1979) a poison pen to kill a python and in The Man With The Golden Gun (1974) another fountain pen was  used this time as the barrel of the Golden Gun. So could this be another use for Mr Bond so as to be not shaken or stirred? We’ll have to ask ‘O’. Retail $45. 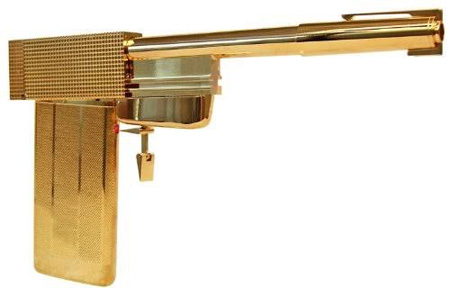